The history of Oktoberfest 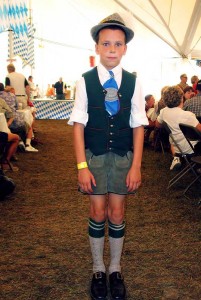 Oktoberfest is a annual festival held in Munich, Bavaria, Germany, running from late September to the first weekend in October. One of the most well-known events in Germany, Oktoberfest is the world’s largest cultural fair; more than 5 million people attend the Munich Oktoberfest every year. Oktoberfest is an important tradition in Bavarian culture, having been held since 1810. Other cities across the world also hold Oktoberfest celebrations, modeled after the Munich event.

The festival is held in an area named the Theresienwiese (field, or meadow, of Therese), often called Wiesn for short, located near Munich’s center.

Crown Prince Ludwig, later to become King Ludwig I, was married to Princess Therese of Bavaria on October 12, 1810. The citizens of Munich were invited to attend the festivities held on the fields in front of the city gates to celebrate the happy royal event. The fields have been named Theresienwiese (“Theresa’s meadow”) in honor of the Crown Princess ever since, although the locals have since abbreviated the name simply to the “Wies’n”.
Horse races in the presence of the Royal Family marked the close of the event that was celebrated as a festival for the whole of Bavaria. The decision to repeat the horse races in the subsequent year gave rise to the tradition of the Oktoberfest. 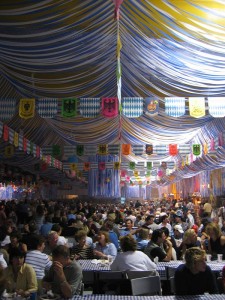 In 1811, an agricultural show was added to promote Bavarian agriculture. The horse race persisted until 1960, the agricultural show still exists and is held every four years on the southern part of the festival grounds. In 1816, carnival booths appeared; the main prizes were silver, porcelain, and jewelry. The founding citizens of Munich assumed responsibility for festival management in 1819, and it was decided to make the Oktoberfest an annual event. Later, it was lengthened and the date pushed forward, because days are longer and warmer at the end of September.

To honour the marriage of Prince Ludwig and Therese of Saxe-Hildburghausen, a parade took place for the first time in 1810. Since 1850, this has become an annual event and an important component of the Oktoberfest. Eight thousand people—mostly from Bavaria—in traditional costumes walk from Maximilian Street through the centre of Munich to the Oktoberfest grounds. The march is led by the Münchner Kindl.

Since 1850, the statue of Bavaria has watched the Oktoberfest. This worldly Bavarian patron was first sketched by Leo von Klenze in a classic style and Ludwig Michael Schwanthaler romanticised and “Germanised” the draft. The statue was constructed by Johann Baptist Stiglmaier and Ferdinand von Miller.

In 1853, the Bavarian Ruhmeshalle was completed. In 1854, the festival was cancelled after 3,000 residents of Munich died during a cholera epidemic. There was no Oktoberfest in 1866 because Bavaria was involved in the Austro-Prussian War. In 1870, the Franco-Prussian War forced the cancellation of the festival. In 1873, the festival was cancelled due to another cholera epidemic. In 1880, the electric light illuminated more than 400 booths and tents. In 1881, booths selling bratwurst opened. Beer was first served in glass mugs in 1892.

At the end of the 19th century, a re-organization took place. Until then, there were games of skittles, large dance floors, and trees for climbing in the beer booths. Organizers wanted more room for guests and musicians. The booths became beer halls.
In 1887, the Entry of the Oktoberfest Staff and Breweries took place for the first time. This event showcases the splendidly decorated horse teams of the breweries and the bands that play in the festival tents. This event always takes place on the first Saturday of the Oktoberfest and serves as the official prelude to the Oktoberfest celebration.

From 1914 to 1918, World War I prevented the celebration of Oktoberfest. In 1919 and 1920, the two years after the war, Munich celebrated only an “Autumn Fest.” In 1923 and 1924, the Oktoberfest was not held due to inflation.
In 1933, the Bavarian white and blue flag was replaced with the swastika flag. During World War II, from 1939 to 1945, no Oktoberfest took place. Following the war, from 1946 to 1948, Munich celebrated only the “Autumn Fest.” The sale of proper Oktoberfest beer—2% stronger in alcohol than normal beer—was not permitted; guests could only drink normal beer.

In 1910, Oktoberfest celebrated its 100th anniversary. Some 120,000 litres of beer were poured. In 1913, the Bräurosl was founded, which was the largest Oktoberfest beer tent ever, with room for about 12,000 people.

Since 1950, there has been a traditional festival opening: A twelve gun salute and the tapping of the first keg of Oktoberfest beer at 12:00 by the incumbent Mayor of Munich with the cry “O’ zapft ist!” (“It’s tapped!” in the Austro-Bavarian language) opens the Oktoberfest. The Mayor then gives the first beer to the Minister-President of the State of Bavaria. The first mayor to tap the keg was Thomas Wimmer.

By 1960, the Oktoberfest had turned into an enormous world-famous festival. Since then, foreigners began to picture Germans as wearing the Sennerhut, Lederhosen, and the girls in Dirndl.

Traditional visitors wear during the Oktoberfest Bavarian hats (Tirolerhüte), which contain a tuft of goat hair. In Germany, goat hair is highly valued and prized, making it one of the most expensive objects for sale. The more tufts of goat hair on your hat, the wealthier you are considered to be. Technology helping, this tradition ended with the appearance of cheap goat hair imitations on the market.

There are many problems every year with young people who overestimate their ability to handle large amounts of alcohol. Many forget that Oktoberfest beer has 5.8 to 6.3% alcohol and high sugar content (compared to an average of 5.2% of alcohol and low sugar content in German beer), and they pass out due to drunkenness. These drunk patrons are often called “Bierleichen” (German for “beer corpses”).

For the Bierleichen, as well as for the general medical treatment of visitors, the Bavarian branch of German Red Cross operates an aid facility and provides emergency medical care on the festival grounds, staffed with around 100 volunteer medics and doctors per day. They serve together with special detachments of Munich police, fire department and other municipal authorities in the service centre at the Behördenhof (authorities’ court), a large building specially built for the Oktoberfest at the east side of the Theresienwiese, just behind the tents. There is also a place for lost & found children, a lost property office, a security point for women and other public services.

To keep the Oktoberfest, and especially the beer tents, friendly for older people and families, the concept of the “quiet Oktoberfest” was developed in 2005. Until 6:00 p.m. the tents only play quiet music, for example, traditional wind music. The music played in the afternoon is limited to 85 decibels. After 6:00 p.m. Schlager and pop music is played. With these rules, the organizers of the Oktoberfest were able to curb the over-the-top party mentality and preserve the traditional beer tent atmosphere.

Many come Oktoberfest to enjoy the many roller coasters and other fairground rides, both traditional and modern. This year there will be about 80 including the last travelling Enterprise ride of Germany, the Mondlift, which returned to Oktoberfest in 2005.

Starting in 2008, a new Bavarian law intended to ban smoking in all enclosed spaces that are open to the public, even at the Oktoberfest. Because of problems enforcing the anti-smoking law in the big tents there was an exception for the Oktoberfest 2008, although the sale of tobacco was not allowed. After heavy losses in the 2008 local elections with the smoke ban being a big issue in debates, the state’s ruling party meanwhile implemented special exemptions to beer tents and small pubs. The change in regulation is aimed in particular at large tents at the Oktoberfest: So, smoking in the tents is still legal, but the tents usually have non-smoking areas. The sale of tobacco in the tents is now legal, but it is abandoned by agreement. However, in early 2010 a referendum held in Bavaria as a result of a popular initiative re-instituted the original, strict, smoking ban of 2008; thus, no beer will be sold to people caught smoking in the tents. The blanket smoking ban will not take effect until 2011, but all tents will institute the smoking ban this year as to do the “dry run” to identify any unforeseeable issues. The common issue when the smoking ban is in effect is the nauseating stench of stale beer spilled on the floor, which the smoking masked.

2010 marked the 200th anniversary of Oktoberfest. For the anniversary, there was a horse race in historical costumes on opening day. A so-called “Historische Wiesn” (historical Oktoberfest) took place, starting one day earlier than usual on the southern part of the festival grounds. A specially brewed beer (solely available at the tents of the historical Oktoberfest), horse races, and a museum tent gave visitors an impression of how the event felt a century ago.